This is what it looks like when a member of Congress states his position on getting out of Afghanistan: 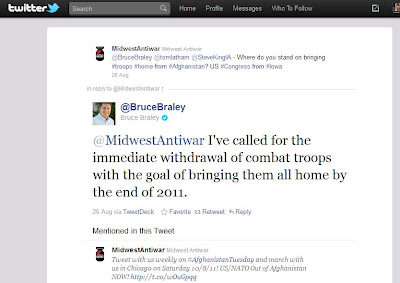 Bruce Braley represents Iowa's 1st congressional district and this is a tweet he sent August 26 in response to our query, "Where do you stand on bringing #troops #home from #Afghanistan?"

That doesn't look so hard does it?

Just about every member of Congress is now on Twitter. (As for those who aren't, that will be the subject of a separate post.) I previously posted Twitter addresses for all the delegations from Midwestern states. And I've now started assembling Twitter addresses for congressmen from the rest of the country, too!

Hundreds of people join a national (and global) conversation on the war on Afghanistan every Tuesday by tweeting on the topic #AfghanistanTuesday.

Now, we've designated a special time every Tuesday -- the hour beginning at noon Eastern time -- for members of Congress and other politicians to chime in.

#AfghanistanHour. It's the time to stand up and be counted. To "speak now or forever hold your peace." To step up to the plate.

Americans expect their representatives to listen to their views and to engage in the vital debates of the day ... especially with respect to war. Twitter is a tool that was custom made for the exercise of American democracy.

(You weren't really expecting to be re-elected in 2012 without solving this Afghanistan problem, were you?)

You can learn all about the #AfghanistanTuesday campaign here.

PLUS . . . Check out the master list of #AfghanistanTuesday blog posts!