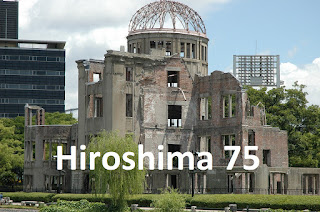 The summer of 2020 will mark the 75th anniversary of the 1945 atomic bombing of Hiroshima and Nagasaki.

This anniversary promises to be especially important as activists work on the campaign to prevent nuclear war by pulling "Back From the Brink" and getting the global nuclear weapons ban adopted.

People are talking right now about how to communicate the gravity of this 75th anniversary, especially as it relates to what will soon be 100 years of nuclear terror.

A list of activities planned in cities throughout the US and worldwide will be compiled below.

This blog now contains content from events that took place in 2012 and 2015 to assist those planning commemorations:

A Ceremony to Commemorate Hiroshima: "Remember the past to commit oneself to the future."

A Ceremony to Commemorate Hiroshima: "People Will Find the Way to Eliminate Nuclear Injury"

(Thanks to PSR Wisconsin for inspiring this page - links to their moving 2019 commemoration in Madison can be found here.)

In addition, here are a dozen posts on this blog that touch on the bombing of Hiroshima and Nagasaki in 1945, and the importance of those events to the movement to eliminate nuclear weapons.

1. Nagasaki: Impressions and Encounter in Nagasaki

2. Approaching Hiroshima: A Challenge for Children's Literature and Peace Education

3. Hersey's "Hiroshima" and a Curriculum for Confronting Nuclear Danger

5. FILM ABOUT HIROSHIMA: Are We All "Children of Hiroshima"?

6. FILM ABOUT HIROSHIMA: "Hiroshima Mon Amour" and the Horror of Forgetting

7. FILM ABOUT HIROSHIMA: Kurosawa's "I Live in Fear" (Nuclear Danger: Three Ways of Talking About the Unmentionable)

8. Can We Confront the Fire and Blast of Nuclear War and Still Remain Human? (Watching "Grave of the Fireflies")

9.  The Marukis' Antiwar Paintings: A Lesson in Collaboration

10. Nuclear Weapons: Why "Imagine the Worst"?

An extensive list of resources on Hiroshima and Nagasaki on this AFSC event page.


Projected 2020 Events Commemorating the Hiroshima/Nagasaki Bombings
(List in formation and will be periodically updated. An extensive list of past event sponsors are listed on the Abolition 2000 website.)

Albuquerque, August 6-9
Campaign Nonviolence National Conference
Conference and training August 7 and 8, in partnership with the peace vigils at Los Alamos August 6 and 9.