GOOD KILL: Struggling to Bring the Truth of Drone Killing Out of the Shadows

I saw the movie Good Kill last night.  I have five observations (below) but the most important thing I have to say is: anyone who cares about stopping drone killing should take a friend and go see this movie, and then do it again, and again. Here's why . . . .

(1) You can object to the frame of this movie -- US-centric, macho, militaristic -- but that's in fact where the public is starting from.

(2) "Good kill." Wait for the scene when the protagonist describe an attack on a home containing the "target" as well as the target's wife and children. And then the attack, hours later, on the funeral . . . .

(3)  "It never ends." It's worth it to get people to this movie just for the one-minute long exchange about the rationale for the "war on terror."


. . . what happens when preemptive violence is automated?

(4) "Lawful orders."  The movie is all about being a cog in a machine where all you do is follow someone else's orders, and your thinking is not welcomed. Any kid thinking about enlisting in order to break out of the world they're "stuck" in should see this movie. (See In Whose Machine Will YOU Be a Cog?)

(5) You can object to the fact that the movie focuses on how hard it is on the soldiers. But if we expect soldiers to resist, don't we need to invest the time and energy to empathize with them, too?

I don't know if everyone in the movement to stop drone killing will agree with me about these observations. Drop a comment below -- pro or con -- and let the drone debate proceed!

Then do it again.


Food for thought: what kind of movies are seen by LARGE numbers of people . . . ? http://www.boxofficemojo.com/weekend/chart/ 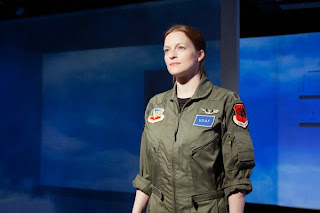 Email ThisBlogThis!Share to TwitterShare to FacebookShare to Pinterest
Labels: anti-drones film, film, public education about the problem of drones, resistance