"Why focus on drone attacks?"


The months of April and May saw a large number of protests against the U.S. program of targeted killing with drones, and progress in challenging that program in Congress.

An interesting question was raised on a listserve:  "Why focus on drone attacks?" The questioner -- a dedicated peace activist with an inquiring mind -- explained that he felt a bit perplexed:


As far as I understand, these drone attacks cause damage similar to that caused by other kinds of weapons – cruise missiles, air-to-surface missiles fired by planes or helicopters, gravity bombs, artillery.

I don’t think that the anti-drone campaign would be pleased if the drone attacks stopped, but the same level of U.S. attacks were carried out by other weapons – say manned flights carrying missiles. Would that be better in some way? If it would be better, I ask you to explain to me how or why it would be better.

Here's how I responded:


In my opinion, the reason to focus on drones is this: when we focus on drones, the general public is able to "get," to an unusual extent, the degree to which popular consent has been banished from the process of carrying out state violence. (Sure, it was banished long ago, but the absence of a human in the cockpit of a drone suddenly makes a light bulb go off in people's heads.) It takes some prodding, but people can sense that drone use somehow crosses a line. And that opens up the discussion about how our consent has been eliminated from the vast range of US militarism.

I'm curious to know if other people agree with me.  What is your experience? Is the movement against drones helping to build consciousness about the deeper issues of consent?  Or are we being sidetracked by paying too much attention to other aspects of drone warfare? 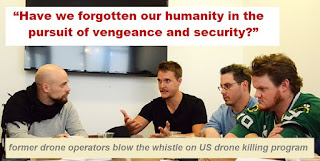 Operating drones and other robotic killing machines still requires some human operators. And despite all their hopes to the contrary, the military establishment has discovered that human operators have consciences.

(See THIS CHANGES EVERYTHING: Drone Pilots Speaking Out)

Today we live in a different world. Without the draft, the people have "checked out." It is like Rome ... the legions do the work of empire and the people are kept happy with bread and circus. (Or Starbucks and "Dancing With the Stars," if you prefer.)

(See Not Your Father's Antiwar Movement ) 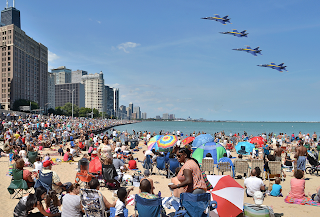 Year after year, hundreds of thousands of people from Chicago and the surrounding area gather on the lakeshore to watch aerial displays by an array of planes. Most don't suspect that they are being subjected to an intense propaganda effort by multiple branches of the U.S. military.  The Chicago Coalition to Shut Down Guantanamo views this as a perfect opportunity to engage with the public and enlist them in the growing movement against U.S. war, torture, surveillance, and other crimes.  We will join activists from many other peace and justice groups who have had a growing presence at this event in recent years. 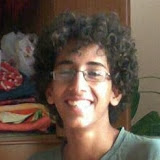 If the public will join us in asking the question "Who decides?" about drone executions, I believe they will rapidly come to realize that they are utterly dissatisfied with what the government is saying.

(See Who Decides? (When Drones are Judge, Jury, and Executioner) ) 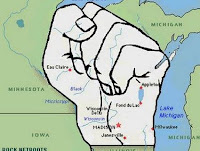 (See Reviews of "Thermonuclear Monarchy: Choosing Between Democracy and Doom" by Elaine Scarry)
Posted by Joe Scarry at 7:13 PM

Email ThisBlogThis!Share to TwitterShare to FacebookShare to Pinterest
Labels: anti-drones protest, democracy, drone, drones undermining consent of the U.S. populace in warmaking, Getting the Truth, public education about the problem of drones, resistance