The Most Important Place to Be in America on 2/28

On Tuesday, February 28, 2012, people all over the country will protest the suppression of the Occupy Movement. Demonstrations will take place in New York City, L.A., Minneapolis-St. Paul, Cleveland, and other cities. But the most important one will be in Chicago. Here's why . . . . 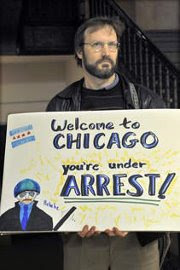 Clearly, the U.S. government is terrified of what the Occupy Movement everywhere represents: a new tendency among Americans to meet in the public square and insist on finding solutions to the things that are broken in our country. But the government is particularly terrified of what it might mean if dissent and resistance takes hold in Chicago at the very moment when our country's oligarchs prepare to meet here to engage in one of their periodic spoils-sharing and occupation-planning exercises -- the NATO/G8 meetings taking place May 19-21. (Not to mention the peremptory coronation of the the second Obama presidency, on the home turf of Obama's chief enforcer, Rahm Emanuel.) That is why the City has made sure to arrest every occupier in sight, and dangle charges over their heads to frustrate their rights to protest and dissent when NATO/G8 is in Chicago. 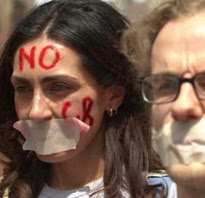 There have been shameful attempts to suppress the Occupy movement in city after city. But if there is one city in which the push-back must be IMMEDIATE and MASSIVE, it is Chicago. We need to make it clear that this is not the end of the resistance to U.S. wars and impoverishing policies ... it's the beginning of the end for NATO/G8.

Stand with Occupy Chicago on February 28 to "STOP the Suppression of the Occupy Movement!" -- "Join" the February 28 event on Facebook and invite ALL your friends! Email them. Call them. Let's make sure we have TEN people in the street on February 28 for every one who has been arrested* !


*P.S. - For more on this concept, see "Never Try to Silence a Tuesdayista"
Posted by Joe Scarry at 3:20 PM