On Saturday, December 17, 2011, Occupy Chicago and Midwest Antiwar Mobilization held a rally and march to support Bradley Manning and call for justice for him.


(See the expanded report of the Chicago rally to save Bradley Manning on the Chicago World Can't Wait website. Photos courtesy FJJ.)


PS - If you haven't seen this amazing short film by Kyle Broom - "Prevention of Injury (POI)" - stop what you're doing right now and take 20 minutes to watch it and think about what is being done to Bradley Manning.

What are people doing in YOUR community to demand, "Free Bradley!" ?? 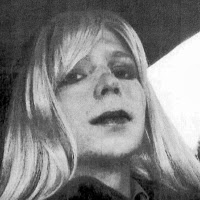 "In whom and in what should we be putting our faith?" If not in Manning -- and the Manning Principle -- then in whom, and in what?

(See The Path to Peace: Why Not the Manning Way?) 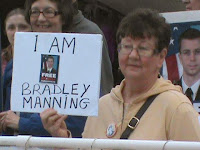 A person may not feel that s/he is another Daniel Ellsberg ... or Paul Revere ... or Otto and Elise Hampel ... or Ai Weiwei ... or Bradley [Chelsea] Manning. But these are heroes we can aspire to emulate.

(See I am (I will become) Bradley Manning )

What would it mean for each of us to commit, say, to a year in which we would consistently place the truth in front of ordinary people, day after day, and patiently engage with them as they worked through the implications? What would it mean if we all believed in people as much as Bradley Manning?

(See Are YOU Ready to Swallow a Daily Dose of "the Manning Principle"?)

Email ThisBlogThis!Share to TwitterShare to FacebookShare to Pinterest
Labels: Chicago, Getting the Truth, Manning, resistance