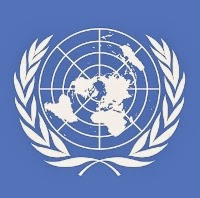 In a post several weeks ago, I pointed to the way the media is being used in an unacceptable way to glide past the public's need to know the truth about U.S. drone killings.

Now, the United Nations is on the case.

In the newly-issue report of UN Special Rapporteur on extrajudicial, summary or arbitrary executions, Christof Heyns, there is a clear call for a big change:

[RECOMMENDATION] 108. States must be transparent about the development, acquisition and use of armed drones. They must publicly disclose the legal basis for the use of drones, operational responsibility, criteria for targeting, impact (including civilian casualties), and information about alleged violations, investigations and prosecutions.

[RECOMMENDATION] 110. States must ensure meaningful oversight of the use of drones and, where appropriate, investigation and accountability as well as reparations for their misuse.
In other words, no more sweeping the killings under the rug. The report makes clear that the U.S. has to report fully on all its drone attacks:

98. The various components of transparency require that the criteria for targeting and the authority that approves killings be known and that drone operations be placed in institutions that are able to disclose to the public the methods and findings of their intelligence, criteria used in selection of targets and precautions incorporated in such criteria.

99. One of the criticisms levelled against the current drone programmes has been the absence of an official record regarding the persons killed. States must also give guarantees of non-repetition and give effect to the right to reparations of victims of drone strikes.

100. Drone victims, just as any other human rights victims, and society at large have a right to have access to information relating to allegations of human rights violations and their investigation. The Human Rights Council has emphasized the need under international human rights law for transparency, highlighting victims’ right to know the truth about the perpetrators, their accomplices and their motives there. Likewise, during an armed conflict, relatives of persons killed or missing have the right to know the fate of their relatives.
It's there in black and white: heavy-duty reporting and verification requirements.

There's lots more, and I encourage everyone to read the full 24-page report: Extrajudicial, summary or arbitrary executions. But the above recommendations alone are crucial for laying the groundwork for everything that we are trying to do to put a stop to the U.S. drone killings. It all starts with getting the truth out in the open.

(1) Will media outlets commit to boycott all off-the-record sourcing about U.S. drone killing, and support the call for full, on-the-record transparency by the U.S. government?

(2) Will the U.S. affirmatively comply with its obligations ["97. Accountability for violations of international human rights law (or international humanitarian law) is not a matter of choice or policy; it is a duty under domestic and international law"] by creating a full public register of all drone killings that it has carried out -- by date certain?

(3) Will the U.S. honor recommendation 112 ("Drone operators must not be placed within a chain of command that requires them to report within institutions that are unable to disclose their operations") by immediately terminating CIA drone operations, as well as all other secret drone operations?


No one has any illusions that getting the United States to obey the law will be easy. But at least now -- with the member states of the UN stating what's required in black and white -- we have a start. 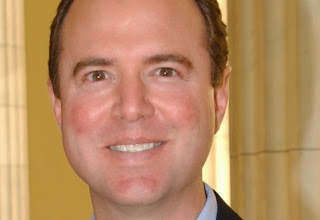 First Reps. Raúl M. Grijalva (D-AZ) and Keith Ellison (D-MN) called the U.S. on the carpet for dodging the call from the international community to come clean about its drone killings. Then Reps. Adam Schiff (D-CA) and Walter Jones (R-NC) submitted a bill calling for drone transparency. So ... are we finally going to get the truth?

At the end of the first day of the 2012 CODEPINK drone conference, I came to a realization: the fundamental problem that we had all gathered to address is that drones render killing 100% invisible. And as long as the killing is invisible, we lose the most powerful tool we have for fighting the killing: the disgust and outrage of the general public.

We are allowed to know all about these killings, provided we're prepared to believe the statements of a person we can't confirm exists about a program which is not acknowledged to be happening. We are living in a nightmare that makes Philip K. Dick's dystopias look cozy in comparison.

On Sunday, September 7, 2013, the New York Times ran an account of a drone strike that had occurred the previous Thursday: U.S. Drone Strike Kills 6 in Pakistan, Fueling Anger . This short account is a case study in what is wrong with the U.S. drone wars.

(See September 5 in Pakistan: Another Day, Another Drone Killing) 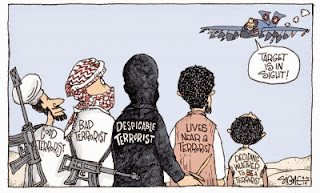 In other words, pretty much anybody and everybody gets lumped together with "terrorists"; the vaunted "precision" of U.S. military strikes isn't precise at all.