Afghanistan: Where is the Church?

October 7 marks the 10th anniversary of the war in Afghanistan, and on that and surrounding days, antiwar protests will take place in Chicago, across the country, and around the world.

I think it is very likely that, during the course of those protests, we are going to hear people say, "Continued U.S. war -- in Afghanistan and elsewhere -- can no longer be accepted as consistent with any possible understanding of God's will for God's Kingdom -- if, indeed, it ever could be."

Where will that leave those of us in the audience who consider ourselves Christians? 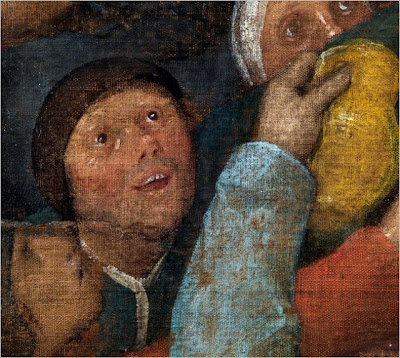 Another possible response is to nod in agreement -- to murmur inwardly, "I'm with you in spirit" -- and then go back to one's other concerns.

And the third and final possible response is to embrace this statement and start to live it.

We are all going to have to decide where we stand. And so, again, I ask: Where will the Church be on October 9, 2011?

Is there any reason for the Church not to embrace an antiwar stance? Some people believe an antiwar stance is too risky for the Church. An antiwar stance may anger some existing members, or scare away potential members. But is that position -- whether or not it is defensible -- even accurate? As a friend of mine put it in a message to me yesterday: "It's so maddening to me when the Church, in this day and age, with everything that's at stake, won't take a stand for fear of losing members. In my opinion, the numbers of members would probably rise if they did take principled stands on the things they should be addressing."

To be sure, there are faith communities that unreservedly stand against war. Endorsers of the October 8 Chicago demonstration against the Afghanistan War include: 8th Day Center for Justice, American Friends Service Committee, and Wellington Ave UCC. But by and large, they are the exceptions that prove the rule that it is the environmentalists ... the labor people ... the LGBT movement ... the students ... the Palestine solidarity people ... the ethnic and community groups ... the dedicated peace groups ... and others that are carrying the vast majority of the load.

Many churches across Chicago, on October 9, 2011, relying on the common lectionary, will read lessons that include the Matthew 22:1-14 parable of the guests at the wedding: "So go to the street corners and invite to the banquet anyone you find." The parable features a somewhat mercurial wedding host, one who becomes irate at heedless invitees, then expansively invites "anyone you find," and then becomes irate again at an attendee who seems willing to enjoy the festivities -- to "be there in spirit" -- but who can't be bothered to carry his own share of the responsibility by dressing the part. What is this supposed to tell us about God's will for God's Kingdom? 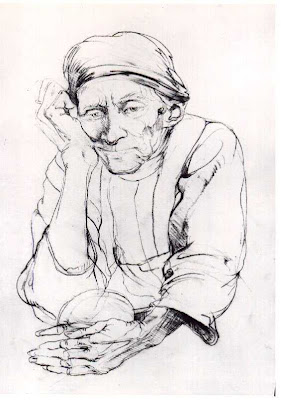 Is it possible that this parable is telling us that it's no longer acceptable to passively nod in agreement -- -- to murmur inwardly, "I'm with you in spirit" -- and then to go back to our other concerns? Is it possible that God's will for God's Kingdom is for a world without war, and that God is issuing an invitation to every child of God, every single one of the saints that collectively make up the Church, to become an active worker for peace, and against war? And if it is, how can any of us give short shrift to this invitation? Certainly vast numbers of people are already answering the call. 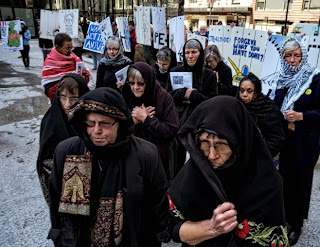 In gratitude to John Kass, and in keeping with what I perceive to be our shared desire to place our faith "in the world" and share the good news (while at the same time not turning people off with too much Jesus talk) -- in short, keeping my tough guy cred intact -- I herewith share some scenes from my Holy Week 2014.

(See Holy Week 2014 in Chicago - Making a Spectacle of Ourselves ) 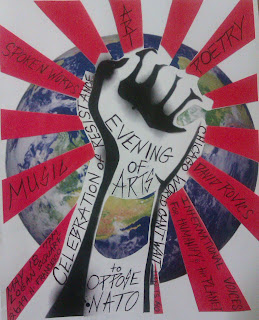 One place I've focused my activism is my church community. Last fall, at the time of the Afghanistan invasion anniversary, I posed the question, "Where is the Church?" In the weeks and months that followed, I realized that I, myself, had to be part of the solution of giving direction to the Church. 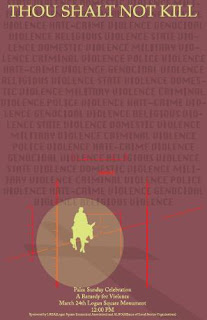 "We will discuss replacing the violence of militarism with a community of peacemaking that will not channel our children into the service because they are poor. We will speak of using budgets at every level of government to ensure fairness and equality – two of the cornerstones of peace."