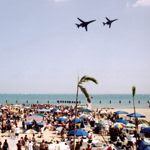 Ever since I moved to Chicago about 15 years ago, I've participated in one of the great summer rituals here: the annual Chicago Air and Water Show. It takes place on a mid-August weekend every year, and by Thursday afternoon the week of the show, the skies over Chicago are filled with the thunder of jets warming up for their performances on Saturday and Sunday.


Several million people will go to the lakefront for the show -- the operative word is "throng" -- and there is no denying that the events are eye-popping. If you don't think jets are cool, you haven't seen a Blue Angel fly 100 feet above the beach upside down.

I remember being flabbergasted when a stealth bomber lumbered down the lakeshore. It was massive.

And I remember being mystified when a stealth fighter passed. Unlike all the other rumbling and roaring planes, it snuck by in silence. 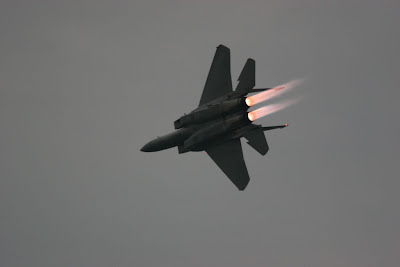 More than anything, I have a visceral memory of lying in the grass in Lincoln Park as a jet streaked east towards the lake, and the thought occurred to me, "This would be terrifying if I were a rice farmer in a paddy somewhere and I didn't know what this is all about."

Yes, I confess, up until that moment, I had approached the Chicago Air and Water Show with very little perspective, or awareness, or empathy for others.

There are people who stand up every year to add needed perspective to the event.

This is important, because the Chicago Air and Water Show is a glorification of our power to make war. It says, "Look how powerful we are. Look how clever we are. Aren't you glad you're a part of this? (Maybe if you're lucky, you could actually join the team!) Here come the jets -- flexing their muscles so you don't have to ...." Bread and circus updated for the 2000s . . . .

What does it say about us that millions turn out to enjoy the war machine spectacle, and only a handful come to protest it? 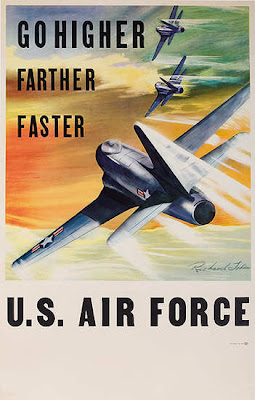 And the part about "joining the team" is especially important, because the Chicago Air and Water Show is a critical moment to directly and indirectly recruit young people to be absorbed into the American war machine. All the services will have their recruiting booths there. This juxtaposition of entertainment and recruiting pitch is always obscene, but especially so as our government sidles into its fourth (Iraq*, Afghanistan, Libya**, Pakistan***) concurrent war while watching the civilian economy continue to shrivel and the jobs for young people all but dry up.

C'mon Chicago - do you think the Blue Angels exist because it's patriotic to give midwesterners free entertainment in the summer? Do you think they fly up and down the lakefront because they need the practice?

Now, when I see those jets, I think, "I do know what this is all about, which is precisely why I find it terrifying!"

* Well, only still an American "war" in the sense that it is still producing American "casualties".

** The Obama administration says that, far from being a "war," Libya doesn't even count as "hostilities," because it only involves an air campaign. Think about this assertion as you watch the jets streak by at the Chicago Air & Water Show.

*** I don't know if there will be a Predator drone in the Chicago Air & Water Show this year. It would certainly seem odd to leave the drones at home, considering the degree to which drones have come to define America's posture toward the rest of the world! 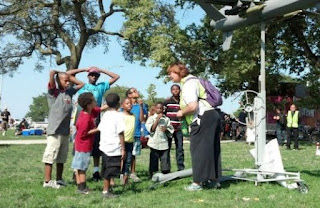 Coming off our experience this past weekend once again protesting against drone killing, drone surveillance, and related acts of militarism at the Chicago Air and Water Show, I am more confirmed than ever in my view that air shows are a very effective place to get our message out to the public.

Now that the Israeli government's killings in Gaza are front-page news -- particularly the way military aircraft is being used to mow down innocent men, women, and children -- Boeing's involvement is in everyone's face.

(See Boeing Has an Israel Problem . . . and Chicago Has a Boeing Problem)

I'm trying to understand: "What was Hayao Miyazaki thinking (when he made his latest animated film, The Wind Rises)?" How can this most humane (and antiwar) of artists created an homage to the creator of the Japanese Zero fighter plane?

(See Boys and Their Toys (Trying to Understand "The Wind Rises")) 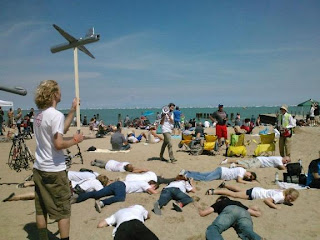 We're out here today
to highlight a contradiction
that we sit here in comfort
and ooh and ahh over these war machines.
We think it's important that we remember
that when the rest of the world hears these sounds
it means that their lives may soon be ending.

(See Taking the NO DRONES! Message to the Masses at Chicago's Air and Water Show) 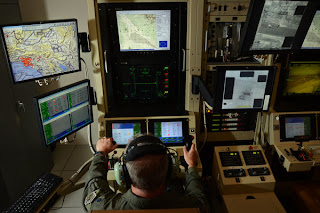 (See Mothers Don't Let Your Children Grow Up to Be Drone Pilots)
Posted by Joe Scarry at 4:57 AM No comments: